Are you leasing a pub in St Albans?

Call 01234 355 358 today for a free pub survey quote – our experienced, local Surveyors will provide comprehensive survey reports which will not only save you money but give you peace of mind too.

Many St Albans pubs are old, historic buildings and with this type of building there is much to consider as well as if it is a Listed Building certain criteria to follow if carrying out alterations and amendments.

Call our friendly Building Surveyors if you are taking on a pub lease or buying a pub. 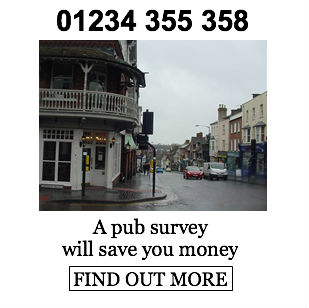 There is an abundance of Pubs and historic coaching Inns in St Albans including the Guinness Book of Records listed oldest pub in Britain Ye Olde Fighting Cocks in Abbey Mill Lane, which dates back to the 8th century (although many pubs across the UK lay claim to being the oldest).

St Albans’ historic Inn – Ye Olde Fighting Cocks is octagonal and free standing in appearance, which is attributable to its original purpose, which was that of a pigeon house. The building has been amended and altered over the years with its timber frame structure still visible clearly, low ceilings and intriguing layout. In medieval times the building as used as dovecote and was originally located near to St Albans Abbey then later moved to Abbey Mill Lane in 1539 after the dissolution of the Abbey.

The foundations of the original building date back to approximately 793 and incorporate a section of the Palace of Offa, King of the Mercians. Ye Olde Fighting Cocks’ building today was built in the 11th century adjacent to St Albans Cathedral and grounds with tunnels, once apparently used by Monks, stretching from the beer cellar to St Albans Cathedral. Ye Olde Fighting Cocks’ pub’s original name was The Round House, most likely due to its shape, then being renamed Ye Olde Fighting Cocks which related to the cock fighting that occurred during the late 19th and early 20th centuries in the main bar. When the sport of cock fighting was banned in 1849 the pub was renamed again this time to The Fisherman although by 1872

The city of St Albans is also known for being the location of the headquarters and warehouse of CAMRA, the Campaign for Real Ale. CAMRA was established in 1971 when its founders reacting to the dominance of a few large companies in the UK beer market and wishing to support and promote quality brewers, community pubs and consumer rights too.