We provide all types of property advice with building surveys tailored to your individual property outlining any property issues as well as anticipated costs for any repairs or works required. A building survey will save you money helping you negotiate the best market price and is essential so that you are fully aware of the large investment you are making in what can be a very uncertain marketplace.

Our structural surveys are easy to follow written in plain English with numerous photos and unique survey sketches to ensure any property issues are outlined clearly.

Our Chartered Surveyors are independent of mortgage lenders and estate agents working with your best interests at heart. Give us a call today for friendly property advice 01234 355 358 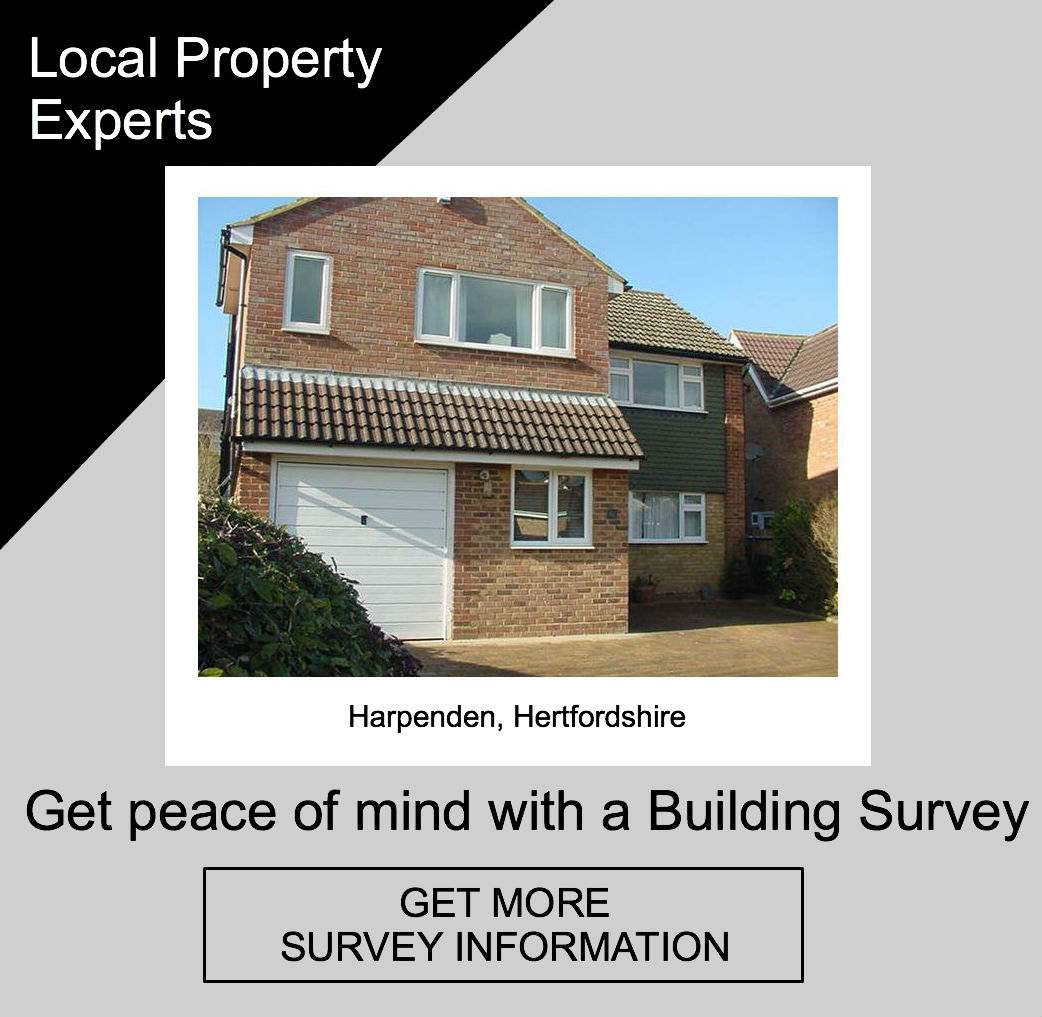 On the A1081 close to junction 9 of the M1 and junctions 4/5 of the A1 is the picturesque town of Harpenden. It is close to St Albans to the south and Redbourn to the west. Harpenden, due to the delightful period cottages, town greens, Common and its tree lined High Street, maintains a village feel yet is a busy town, which is popular with commuters due to its good road and rail links.

Harpenden is positioned between to the west Watling Street and to the east the Great North Road with several green areas such as Church Green, Leyton Green, High Street Green and the Green Flag award winning large Harpenden Common, which covers 238 acres and is at the heart of the town. Many events including Classics on the Common and the classic car rally are held there every July.

Harpenden is first recorded in writing in a deed dated 1060, showing that Edward the Confessor granted an estate to Westminster Abbey, which contained the area around Hwaethamstede, which has since become known as Wheathampstead, and Herpedene.

This area was first settled in the first century B.C. by the Belgae who were moving inland clearing areas to set up farms. The Romans came next leaving evidence of their presence in both the river valleys and at Rothamsted and also at St Albans where they had a main settlement known as Verulamium.

During the Anglo-Saxon era there was disputes with the Danes and an agreement seems to have been reached in 886 when the River Lea became the agreed dividing line between them. The Saxons stayed to the west and the Danes remained to the east.

Harpenden was not deemed to be big enough to warrant its own train station when the railways were being developed, however in 1860 Luton opened its station which passed through Harpenden and in 1868 when the Bedford to London line was opened many of the railway workers were housed in Harpenden and the village had grown enough to get its own station and is now used by hundred of commuters daily.

Harpenden a delightful place to live

The attractiveness and desirability of living in Harpenden is reflected in the cost of housing which is well above the national average. Harpenden is predominantly a residential town but there are a few light industrial factories in the area.

The centre of the ‘the village’ as it is referred to, has many interesting individual shops and a couple of supermarkets along with numerous restaurants, pubs and cafes, many of which we have visited! There are also places to shop in North Harpenden and Batford.

Batford has the River Lea running through it, which has a ford at the end of Crabtree Lane and Marquis Lane and as a child we can still remember a car trying to drive through it and getting stuck! They also filmed an episode of the 1970’s police drama “The Professionals” where they had to drive through the ford.

Harpenden has a leisure centre and swimming pool. This is now an indoor pool, but was originally an outdoor pool, where as a child we can remember long hot summers having fun and getting sunburnt!

Notable residents of Harpenden have included singer Frank Ifield and Eric Morecombe, one half of comedy duo Morecombe and Wise. The local Public Hall was re-named The Eric Morecombe Hall as a tribute. Former Arsenal footballers Lee Dixon and Andy Linighan lived in Harpenden and filmaker Stanley Kubrick lived closed by.

Whilst conducting both residential and commercial building surveys in the area it is lovely to visit Lydekker Park which was owned by the Lydekker family until the last family member passed away at the age of 100, Miss Hilda Lydekker leaving the land to the Council to keep as an open space for the public and is a delight to visit. Harpenden is renowned for Rothamsted Research the world famous agricultural research centre which focuses today on sustainable land management and its environmental implications on a large campus with modern conference facilities.

We note that there are some substantial residences in Harpenden in East Common Way and in the West Common area as well as The Avenues, West Common Way, Rothamsted Avenue, Morton End Lane, Park Avenue North and South, Maple Road and Rosebery Avenue, to name but a few. In addition to these most roads around Hatching Green and Kinsbourne Green have a wealth of larger detached properties.

If you are planning to book a building survey on a property you are purchasing in Harpenden or the surrounding area then we would like to assure you that we always send a suitably qualified and experienced surveyor to carry out the job. This ensures that you get expert advice on any issues that we may find with the property we are surveying. All our surveyors are members of the Royal Institution of Chartered Surveyors – RICS – and are Independent Building Surveyors. Being ‘independent’ means that they are working for you and you alone; they do not work for a mortgage company or an estate agents, so they have your best interests at heart.

All our survey contain lots of images, clearly showing any problems that we have identified at the property such as woodworm, rising damp or cracking to the walls. We also use sketches in our survey which are aimed at helping you to understand how certain areas are constructed or to help show more clearly a problem that we have identified. You will also find lots of definitions of any building terminology that we may use in our survey, as we firmly believe in ‘Plain English’ and really want you to fully understand what we are saying in the survey report.